Why and How was the Cold War Fought? 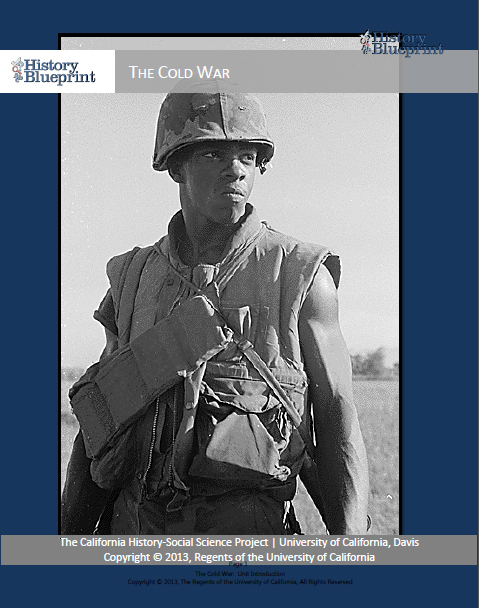 The Cold War that spanned more than four decades touched nearly every country on earth.  The ideological, diplomatic, military, and cultural struggle that started between the Soviet Union and United States went through a number of phases as people and countries in the post-World War II era struggled to define what freedom would mean for them.  This unit of study contains two strands – one for 10th-grade world history students and one for 11th-grade U.S. history students.  The first path through the Cold War focuses on the origins of the world-wide conflict; the newly emerging nations that had been colonies before World War II, and then after the war had to choose whether to align themselves with the United States or Soviets; the international conflicts that arose as a result of those alliances; and finally the end of the Cold War and the collapse of the Soviet Union.  The second path through the Cold War teaches students about the roots of the conflict; the ways in which the American government imagined and implemented anti-communist policies abroad and at home; the effects of the Cold War on individual Americans; the war as it came to Vietnam; and finally the end of the Cold War.

This unit also provides detailed instructions to support student analysis of a number of relevant primary sources, including addresses made by Churchill, Stalin, Truman, Gandhi, Castro, Kennedy, Johnson, Nixon, Reagan, Gorbachev, and dozens of ordinary citizens that experienced the turmoil and daily life of the Cold War.  The unit concludes as it begins with a focus on an engaging and historically significant question: Why and how was the Cold War Fought?

In addition to teaching students about the Cold War, this unit teaches students how to read, write, and think historically, analyze historical evidence from primary and secondary sources, and make interpretations.  Students will practice Common Core reading and writing skills, especially identifying the perspective and point of view of a source, integrating information from visual and written sources, identifying evidence from sources, using that evidence to support an argument or interpretation, and communicating that argument in well-conceived sentence, paragraph, essay, or explanation.

Drawing on new historical scholarship about the global context of the Cold War, students consider, Why and how was the Cold War fought?

This unit was made possible by the generous support of the Library of Congress, the Walter and Elise Haas Fund and History Channel, in addition to California History-Social Science Project / California Subject Matter Project funding.

All History Blueprint materials are Copyrighted by the Regents of the University of California, Davis Campus.  These materials, however, are designed for K12 educational purposes, and as such, teachers have the right to copy and redistribute the material in any medium or format.  This use is predicated on the assumption that educators will give appropriate credit, provide a link to our site (http://chssp.ucdavis.edu), and indicate if any changes were made.  Educators may do so in any reasonable manner, but not in any way that suggests the University or the California or the California History-Social Science Project endorses said teacher, school, or related organization.  Finally, educators or any members of the public may not apply any legal terms or technological measures that legally restrict others from accessing the materials or doing anything that this agreement permits.